J.Noah is the authorized agency for YBN Cordae bookings for the July tour. You can book YBN Cordae directly with us:

Cordae Amari Dunston, known professionally as YBN Cordae, is an American rapper, singer raised in Suitland, Maryland, Dunston began rapping at a young age under the stage name Entendre. He released three mixtapes under this name; “Anxiety” (2014), “I’m So Anxious” (2016), and “I’m So Anonymous” (2017) before becoming a member of the YBN collective in 2018. Dunston subsequently gained popularity by releasing remixes of popular songs, such as “My Name Is” by Eminem, and “Old N*ggas” which was a response to the song “1985” by J. Cole. Videos to both remixes were uploaded to the WorldStarHipHop’s YouTube channel, which led to an immense and immediate positive response from both mainstream media and the online rap community.[1] His debut studio album, The Lost Boy was released on July 26, 2019.

Dunston was born in Raleigh, North Carolina, but relocated to Suitland, Maryland. As a young child, he’d taken an interest in music as his father would always play classic hip hop around him, from artists such as Rakim, Nas, Big L, and Talib Kweli. He began writing raps around the age of fifteen, but did not take it seriously, as it was only a hobby for him. Following the influence he gained from the music his father listened to, he would do research on certain artists through YouTube, attempting to find similar music and “getting lost” in the recommended videos section.

Dunston began gaining more interest in pursuing a rap career as he aged, but focused on his education first, although writing lyrics often distracted him from his studies. He released three mixtapes as a teenager under the name “Entendre” – Anxiety (2014), I’m So Anxious (2016), and I’m So Anonymous (2017). He graduated from high school in 2015 and decided to go to college at Towson University, later dropping out in 2018, explaining that college was “bigger than him” as a first generation student, and he was mainly doing it for his mother. He moved to Los Angeles shortly afterwards. 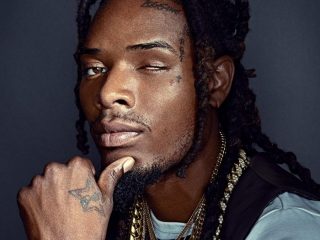