J.Noah is the authorized agency for Nicky Jam bookings in Europe for the October tour. You can book Nicky Jam directly with us:

After a few eventful years Nicky Jam is back stronger than ever. With new music already coming out and more to come he is a real sensation. Nicky Jam speaks to the audience in an amazing way and his song reach big audiences. Because of the big amount of collaborations Nicky Jam does, his music never gets old and stays up to date. He is a real performer and never ceases to amaze his crowds.

Nick Rivera Caminero, known by the stage name Nicky Jam, is an American singer and songwriter. He is best known for hits such as “Travesuras”, “Te Busco” (with Cosculluela), “El Perdón”, “Hasta el Amanecer”, and “El Amante”, the latter three from his album Fénix.

Rivera was born in Lawrence, Massachusetts to a Dominican mother and a Puerto Rican father, they moved to Barrio Obrero in Puerto Rico when he was ten years old. He has been in reggaeton since his youth. The name “Nicky Jam” was jokingly given to Rivera by a homeless man. Rivera’s family was low-income, and as a minor, he performed illegal work in a grocery store in order to help support them, improvising while bagging groceries. One day, a music executive noticed his talent and signed him, and at the age of fourteen, he recorded his first album, …Distinto A Los Demás. The album was not successful, but it did gain him recognition in the music industry and warranted the attention of some music producers such as DJ Joe, DJ Playero, and DJ Chiklin.[ 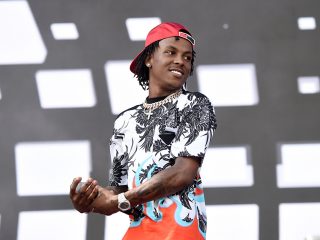